As a participant in the Natural Perfumers Guild Mystery of Musk Project, I have been busy creating natural musk perfumes.  As most natural perfumes get better as they age, I set about creating different versions of perfumes as soon as I was chosen to participate so I would have as much time as possible to modify my final scent before submission to critics, bloggers and fellow perfumers.  Out of a number of different musky perfumes I created, I settled on three different musk perfumes that I felt were innovative and pleasantly musky.  I had a difficult time deciding which of these three perfumes to submit for review.

The first blend I called Celadon Musk and was based on sage absolute which I've always felt had a musky earthy note.  I created many different versions of this musky grassy sage perfume, the best of which highlighted sage and lime.  It is zesty, green and musky.  After much deliberation, I decided against submitting this version.  I found the sage overpowering.  After wearing this Celadon Musk for a time all I could smell was sage.  On a positive note, the perfume lasted forever thanks to the fixitive powers of sage. I tried decreasing the sage absolute, pumping up the base notes, but the perfume then fell flat.  After countless modifications and the deadline looming, I decided to scrap Celadon Musk and focus on other options.

The second possible musk perfume I created for the contest was a very pretty floral blend with a light musky base.  It was a complicated blend utilizing 19 different botanicals.  Normally I don't create perfumes with quite this many notes.  In fact, my best blends---and by best I mean those that sell well and garner the most positive feedback---are perfumes created with fewer ingredients.  The botanicals used in this blend were, in no particular order: black currant bud, vanilla abs, angelica, oud, costus, oakmoss, ambrette, patchouli, vetiver, copaiba balsam, jatamansi, coffee abs, fir balsam, rose otto, jasmine sambac, champaca, bitter orange abs, black pepper, bergamot.  It thrills me, readers to print this as perfumers NEVER reveal all the components of perfumes.  Trade secrets and all.  Believe it or not, this was my first blend I created when starting the Mystery of Musk project.  I will call it Musk #1 for lack of a better name.

In my extensive focus group testing, Musk #1 was far and away the winner.  FYI, in this case my "extensive focus group" consisted of my gay male friends (my best being a fashion designer and graphic designer and the best friends/noses a gal could have) my husband, my son's preschool teacher, a beauty pageant contestant who was trying on a gown my fashion designer friend had created for her, and a neighbor.  Nearly all of them chose this particular musk blend as their favorite.

I decided not to submit Musk #1.  I struggled with the decision.  After all, I am being judged by some heavy hitters in the perfume world.  Why not choose the blend that everyone loved?  Well, I decided it was too common, perhaps unoriginal and most important . . . not very musky.  The whole point of this perfume project was to create a MUSK perfume, and frankly while Musk #1 was pretty and perhaps universally appealing I didn't find it musky enough.  Ironically, one of the musk perfumes I received from another perfumer participating in the project is very similar to Musk #1.  I believe this perfume is receiving favorable reviews which makes me think perhaps I should have played it safe, and submitted Musk #1 after all.  Oh well, hindsight is 20/20 and it's my nature to go with my gut instinct and my gut told me to go with my creation Musk Nouveau.

Musk Nouveau was the third option in the musk perfume contest.  I liked it, as it was decidedly musky with a boozy top note that lent itself well to the roaring 20's concept the Mystery of Musk project was based on.  The inclusion of a natural isolate Phenyl Ethyl Acetate, in the top note lifted the perfume out of it's musky dark base and made it sing with bursts of lemon and sherry.  I included black pepper to spice it up.  The heart blended champaca, jasmine and aged beeswax with a musky sweet drydown of oud, angelica, coffee and amber.  I found this blend interesting.  It was certainly not boring, yet not so original as to only appeal to a select few.  Once my decision was made, it was full steam ahead.  I needed to order labels for my sample vials, figure out packaging, prepare shipments for 30 + perfumers, bloggers and critics all over the world.

The samples shipped in a flurry of labels and tape, and now the waiting game begins.  What will the critics say?  My fellow perfumers have been kind.  It is my personal philosophy that the point of this Mystery of Musk project is to learn, experience and promote Natural Perfumery.  I won't be publicly criticizing my fellow perfumers.  I know each and every one of us worked tirelessly trying to create our best.  What good does it do Natural Perfumery to bash another's creation?  I want the world to embrace natural perfume.  If there's one thing I've learned from my "extensive focus groups" is this: scent preference is subjective.  I am amazed by the comments, both positive and negative I hear when my perfume is sampled.  After a few glasses of wine, tongues are loosened, everyone is spraying perfume and talking loudly.  This is one of my favorite parts of being a perfumer.  Listening to what people feel when smelling perfume.  My group is critical but honest.  Some love a sweet gourmand scent that I can only describe as a toothache in a bottle. Others wrinkle their noses at a beautiful sophisticated orris blend that I've been working on for weeks.  Truly perfume is subjective.
Posted by Charna at 11:22 PM

Hon, you're "Musk Nouveau" is one of the most original I've smelt for a while!
It is s truly naughty, boozy, seductively sweet musk, perfect for the roaring 20's it is named for...
I always see a dance club scene with loud music, incredibly daring sexy women and lot's of dancing...long pearl necklaces dangling, feather boas, illegal booze and dangerous men, grin!
This is one Cool Perfume!

Will the new Musk Nouveau be available on the website for purchase soon?

Musk Nouveau will be available on my website in about a week. I'm just waiting for labels and pictures to post. Thank you for your interest womo531! 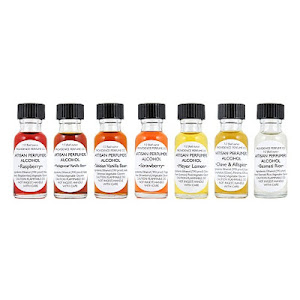